I was cleaning my ‘junkyard’ and came across some of the floppies and CDs from my first PC computer, and I thought to myself, wouldn’t it be nice to play some of those old games on a real PC of that era, instead of using something like DosBox? Plus, it would allow me to get away from Amiga for a little while, which has been getting most of my attention lately. Of course, being the hoarder that I am, I was positive I already have most if not all of the hardware required. So, after a quick check with the very knowledgeable people on the vogons.org forum about appropriate pieces & bits, I went junk-diving (or, in this case loft-diving), and look what I dug out: 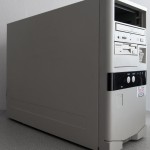 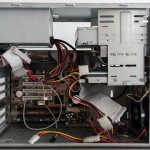 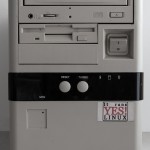 Score! This is pretty close to my first PC, which was something like a Pentium 200 (possibly MMX), with 16MB of memory, an S3 Trio64 graphics card and a Creative SoundBlaster 16. Notice the nice sticker I made (does the sticker remind anyone of anything, possibly this?) – this computer did run some old version of Slackware Linux and was used for a long time as a gateway/router box, with every slot filled with a NIC. It also had some Cisco iOS (Cisco, not Apple iOS!) emulator installed, I think it was Quagga (isn’t that a weird name for a project!).

Anyway, this box currently has inside:

Here’s the other hardware I found: 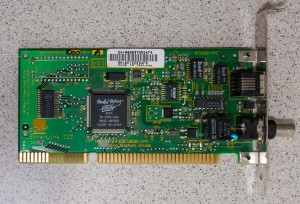 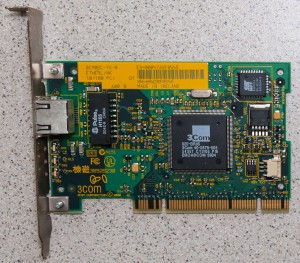 Two 3COM network cards, if possible the old ISA card will be used as it supposedly uses less precious memory in DOS than newer PCI cards. Plus, it has a BNC connector, that has to count for something! 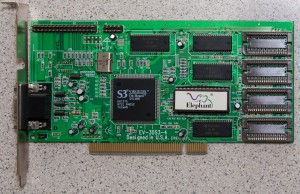 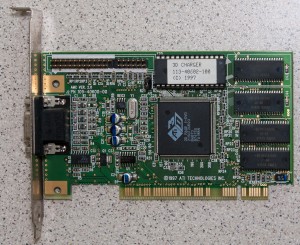 Two graphics cards, with the S3 VirgeDX being the preferred one because of better compatibility for DOS games.

And, last but not least, two crown jewels of my findings: 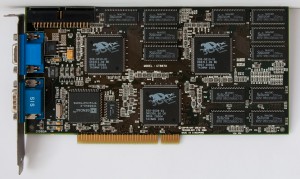 A 3Dfx Voodoo2! I had no idea I still had this, I thought I sold it ages ago. Well, I’m glad now that I didn’t, it will sure be a nice addition to my setup, although I’m still not too sure how much use will it get in a Pentium-era PC, maybe it would fit better in a Pentium3 setup (which I plan to do next, since I have parts for that too!). 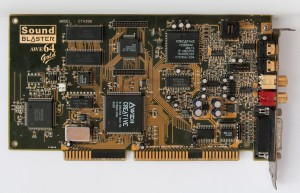 Aaaaand … one of THE soundcards you wanted to have (but, at least in my case, didn’t) – the Creative SoundBlaster AWE64 Gold! This is perfect for my build, good compatibility with older Soundblasters & Adlib, and hopefully more sound quality than some of the previous Soundblasters. As for OPL compatibility, well I’ll see how it fares. Hopefully, I’ll be mostly using my external Roland SoundCanvas SC-55 for most games (and no, I don’t intend to get a MT-32, they are too pricey these days).

Besides the hardware already mentioned, I also have a ‘new’ CDROM drive and an 8GB Western Digital ‘DeathStar’ harddrive.

Having picked appropriate hardware, next up is software. I’m planning to use some form of DOS, probably the latest 6.22 version, together with Windows 98 SE. I just have to remember how to install these two so both OSes are available. If Win98 will be too much for this PC, I’ll have to find a version of Windows 95 somewhere.