Just got this board a few days ago! Thank yous go to mahen, who was kind enough to sponsor the board for me (thanks again man, I really appreciate it!). 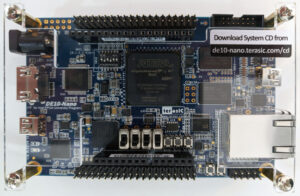 For those not familiar with it, this board is the basis of MiSTer, which is a project that aims to recreate various classic computers, game consoles, and arcade machines on FPGA hardware – and as the name implies, you could say it is a continuation of the MiST project.

The board is surprisingly small, almost the size of an Arduino Mega, but really powerful, with a CycloneV FPGA with more LEs than the one on the DE1-SoC board, plus it has an HDMI output. The only thing missing is some extra SDRAM, but that can be attached to the expansion connector. You can read more about the board here.

The reason I got this board was to continue working on the minimig core, and the first thing I have planned is to try and implement a CPU emulation on the hard ARM CPU cores, that could replace (or at least be an alternative) the tg68k CPU core.

I’ll have to wait to receive the other MiSTer parts besides the FPGA board (at least the SDRAM addon is mandatory for the minimig core), but until then, I really want to try and make something with the HDMI output, as I’ve never worked with it.

And I have just the right project in mind! Will post an update in a day or so.

p.s.: I can’t believe how long it’s been since I posted anything :S

11 thoughts on “Back in business!”